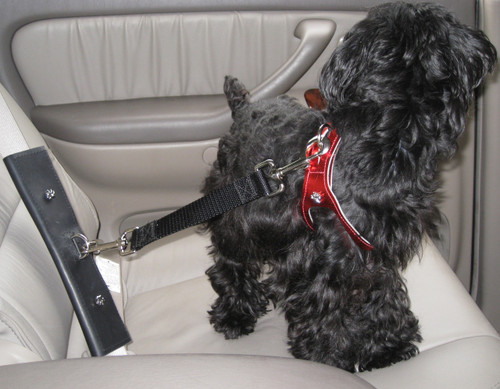 The PawRider™  Pet Seat Belt Adapter is designed to keep the pet securely centered in the seat while riding.  The PawRider provides an easy way to utilize an existing passenger seat belt to control a pet’s motion while in a vehicle.

The PawRider easily wraps around an existing seatbelt and when the D-ring is placed thru the slotted opening and a restraint snap hook is attached to the PawRider on one end and to the D-ring on a pet’s ChokeFree™, the PawRider will firmly hold the pet in place.

When the PawRider is attached to the Shoulder Strap alone, the seatbelt can be pulled out and  tightened in order to restrain the pet as desired.

A study released by AAA finds that driving with a dog in a vehicle is a dangerous distraction that could be as lethal as texting or listening to loud music while behind the wheel.

About two-thirds of dog owners say they routinely drive while petting or playing with their animals -- sometimes even feeding them -- the report found.

Moreover, the study said that pets can endanger drivers during a crash -- becoming flying objects if they are not strapped securely like human passengers.

The study said, for example, that a 10-pound dog in a car driving 50 miles per hour could exert 500 pounds of pressure in a crash, MyFoxTwinCities.com reported.

Safety experts recommend strapping dogs in place with a restraint that can be bought at many pet stores.